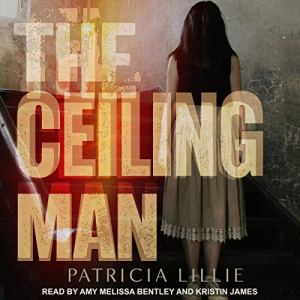 The audio edition of The Ceiling Man, read by Amy Melissa Bentley and Kristin James and published by Tantor Media, is now available from Audible, Google Play, iTunes, Amazon, and the other usual places. If your local library participates in Hoopla, you can borrow it there  for free.

Publishers Weekly had this to say about the ebook/print version: “A supernatural creature arrives in the small, fictional town of Port Massasauga and sets his sights on Abby, a girl with psychic powers similar to his own, in Lillie’s gripping debut…Lillie sidesteps horror clichés and presents characters who don’t make eye-rolling decisions…horror fans should expect an entertaining novel that’s tough to put down.”

(And if you prefer using your eyes rather than your ears, the Kindle and print editions are still available.)